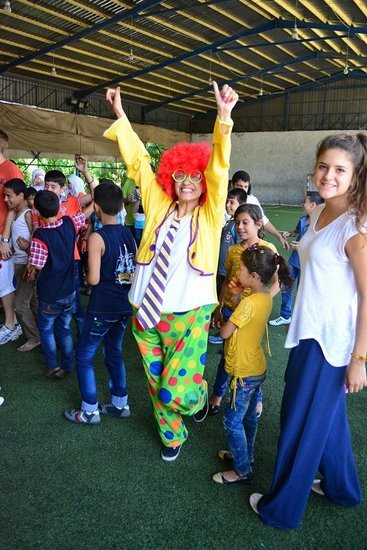 When you meet Syrian refugees and see how the Church in Lebanon is trying to respond to their needs, you can’t help but be moved by it. That was the case for Marc André Wenk and Céline Gelin when they visited in July as part of a team of 16 people representing a Swiss partner of LSESD.

Marc André, a social worker from Geneva, got to meet both Syrian and Iraqi refugees when he went with half of the Swiss team to support a camp led by Baptist Children and Youth Ministries (BCYM) in Beirut. The team led games like ‘capture the flag’, shared a couple of messages with the children and helped out with craft and worship during the four day camp which attracted 60 to 80 children from each day.

What hit Marc André was the size and challenge of the refugee crisis for Lebanon. “I realised how massive the situation was and the fact that it is for real,” he says. “It is touching a large number of people, families and children. Syrian refugees are now 20 per cent of the population of Lebanon.  It is a huge problem to deal with all of these people who have nothing.”

One of the highlights for Marc André was seeing BCYM’s Youth  Minister Pastor Joseph Kazzi share a message with the refugee children and observing their enthusiastic response to him.

“I loved listening to the stories of Pastor Joseph as they were very lively,” he says. “I was touched with how he interacted with the children. He would walk along where they were sitting and when there were questions, all the children were trying to answer them. It was a very clear and simple message.” The importance of what BCYM was doing was evident to Marc André. “Some of the Syrians had quite comfortable lives in Syria and lost everything.”

“You need to reach out to these children.  They have lost their homes, but if you don’t take care of them, they will lose their future as well,” he said.

Céline Gelin, a signwriter who lives near Lausanne in Switzerland, went with the rest of the Swiss team to northern Lebanon, where they were supporting the work of a church among Syrian refugees in one of the villages. On the first two days they helped out with a children’s camp at a local park. The third day they were based at a Child Friendly Space that LSESD extablished in partnership with the local church, and where they got to meet teenage refugees, as well as older men and women, and hear their stories. On their final day in that village, the team went into classes to share with students at one of the schools in the village. Céline was touched by the kindness of the children. When she didn’t have a drink at lunch, one of the girls asked a leader if she could be given one. Another girl offered Céline a spare straw when there wasn’t one for her drink, and at the school some girls cleared a seat for Céline to sit on when she didn’t have one.

“These simple actions touched my heart because they showed me the love. They showed me how to share, how to have the kindness, the gentleness and the joy with their smiles,” Céline says.

Celine was moved by what she saw of the suffering experienced by the Syrian refugees: “So many people have fled the war,” she says.  “I can see how human beings can be cruel and selfish. I heard from Syrian refugees many tragic stories that they have gone through. I could see so many injustices and I wondered what the future holds both for the refugees and for the countries of Syria and of Lebanon also.”

Like Marc André, Céline witnessed the huge needs of the refugees and the vital part the Church in Lebanon is playing in trying to meet them. “The Church is very important,” she says. “Christians are a blessing to their neighbours and they encourage people because they go out and do as much as they can.  I could see that they are the light, the life for many. Even if what they are attempting to do is like a drop in the ocean, it is at least a drop, instead of nothing. It is a precious drop, because each life is precious in God’s eyes.”

There are different ways that your church can get involved in responding to the needs of  vulnerable children in our community.  Contact us for details.