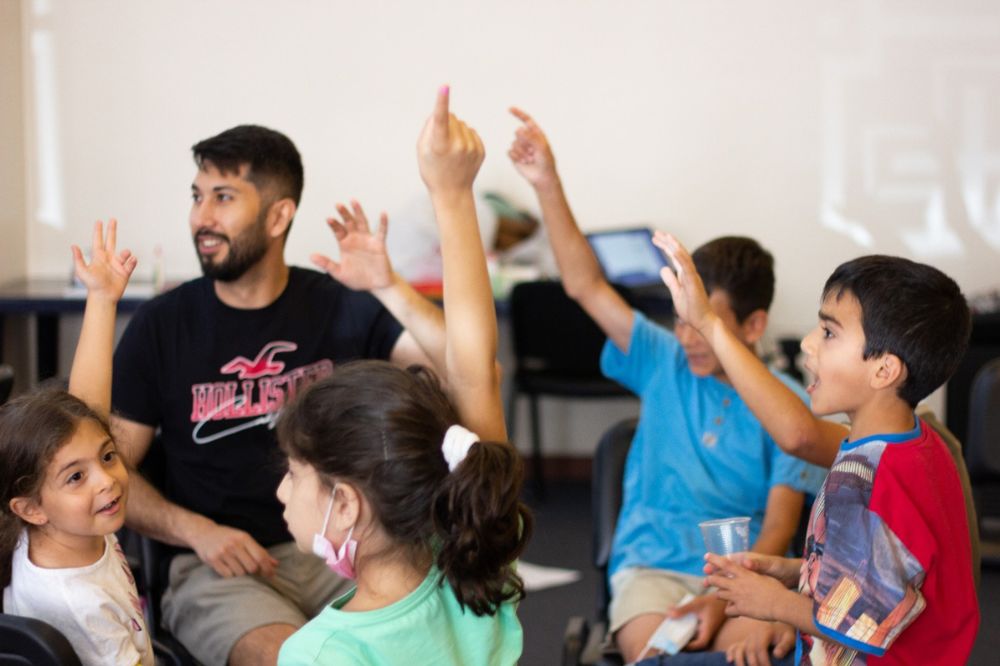 Georgette Issa has been in a wheelchair since the age of one. For her, leaving the house is a tough and pricey task. Not only must she pay for rides, but she must check if there is electricity, so she can use the elevator to move in her wheelchair.

When she was scheduled to speak for one of the days at the Baptist Children and Youth Ministry (BCYM) camp, she knew she might have to cancel coming to camp since she can’t use the stairs.

At Issa’s place, the power typically shuts off at 7:30 a.m. But this time, the power was on! Making the most of her good luck, Issa got ready to use the elevator. She waited downstairs for three hours until her ride arrived. Issa was eager to speak in camp, to share the gospel, and to tell campers about the love of Jesus and his work in her life. For her, it was worth the wait.

This is just one story of how God turned challenges into testimonies during the three-day camp.

Inspired by the song “O Be Careful Little Eye”, the camp’s theme Dir Belak (Be Careful) focused on helping kids understand how to both guard their senses and celebrate them as gifts from God. Each day’s curriculum was concentrated on a different sense, such as eyes, ears and mouth, and finally, arms and legs.

Rémi Chami, one of the participants, said that God spoke to her during the camp, “We should rejoice during hardships. The Lord will be present and protecting us, even when we don’t feel it.”

God can use us, but he also changes us. According to Ghina Saad, BCYM Senior Officer, some of the older campers decided to give their life to Jesus.

“Spiritually, this camp was different to me. The volunteers, leaders and campers also expressed how impactful this camp was to them,” said Saad.

Three guest speakers with different disabilities joined the camp to share their testimonies and host a time of Q&A with the kids. Most kids take their senses for granted, but these testimonies showed them that everything they have (or do not have) is a gift from God. Furthermore, he is their Creator and has a perfect plan for their lives.

Fadi Homsi, one of the guest speakers, lost his sight completely at the age of 30. He is now a music teacher at a school for special needs. During the Q&A sessions, campers asked Homsi deep questions like “What would your reaction be if you started seeing again?” or “How do you read the Bible?” For many campers, listening to testimonies was their favorite part of the day.

Homsi believes that he was called to tell the world about Jesus. He wants the campers to remember that they are so unique, and that sight is a gift.

“I want them to thank the Lord whenever they see something and that’s because seeing is such a beautiful thing. I want them to be filled with life’s beauty… I want them to know that we can glorify God whether we can see or not,” said Homsi.

For many of the 60-70 participants, this was the first time they were introduced to people with disabilities, so it was also an opportunities to show them how to treat people with respect for their differences. Through the speakers’ testimonies, it was plain to see that God uses people regardless of their weaknesses to do extraordinary and glorifying work.

The campers, aged between five to 14, were also a diverse group, coming from various faith and ethnic backgrounds. However, they engaged in love and curiosity.

Another highlight of the camp was the enthusiasm of our volunteers. Although Lebanon is going through many challenges, international teams often become fearless when it comes to the Lord’s calling. A French team of four joined from Eglise Momentum, a church in Bordeaux, France.

The team led games throughout the camp, shared Bible stories, and led worship. Without their prayers and financial support, this camp could not have happened.

“We are ordinary people, but we have an extraordinary God who uses us to do extraordinary things,” said Matthieu Perraud, pastor at Eglise Momentum.